Associated British Ports appointed Hughes and Salvidge to the role of Principal Contractor for the demolition of the redundant concrete barges at Marchwood Industrial Park in Southampton in late 2016.

The main works consisted of: Dismantling the barges into manageable sections and towing the barges from their location to the slipway; Demolition of the existing structures, foundations and barges; and Disposing of the waste materials arising from the demolition works. 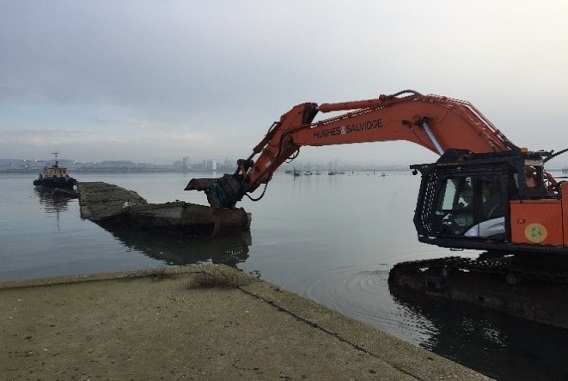 Our machine greets the barge at the slipway

This project presented hazards and restrictions to our activities due to the complex nature of the removal and demolition works. They included:

Twilight Working Conditions – Our activities were planned around high tides which meant that work extended into the evenings. Flood lights were used to ensure a safely lit working area.

Deep Water – Work was carried out around deep water. Buoyancy aids were used and a safety boat was on standby, where necessary, to ensure all potential risks were mitigated.

High Tides – Hughes and Salvidge monitored the low and high tides in order to maximise the distance the barge could be towed onto the slipway.

Prior to commencing demolition, Heras fencing with debris netting was installed around the perimeter of the demolition and crushing area. A safety boat towed a debris boom out into the open water to form an arc around the immediate demolition area.

It was cast out to a suitable distance in order to catch stray airborne pieces of the polystyrene that could land on the water as a result of the demolition process. Operatives periodically scooped out any debris from the catchment zone using fishing landing nets, and disposed of the polystyrene.

Demolition arisings were separated as the work progressed and placed into the relevant bins. Due to weather conditions, the bins containing light material were covered to ensure debris was not blown into the water.