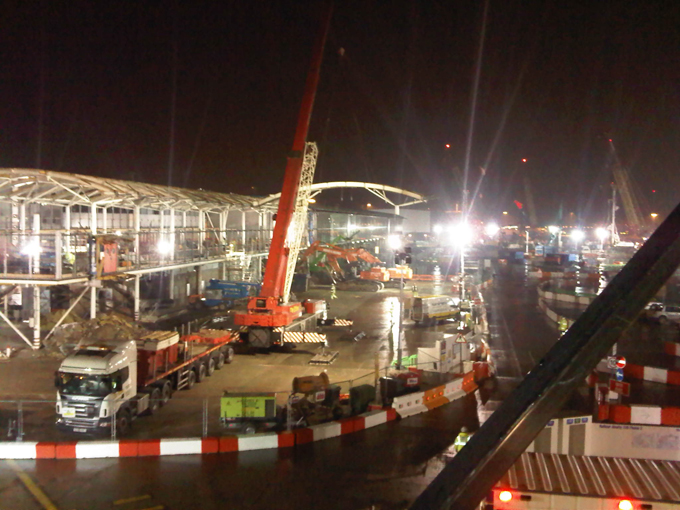 Craning at night[/caption] This London project required the centre element of the pier to be left in situ and operational and the wing sections to be removed. As with all airside projects at London Heathrow Airport, the demolition and construction programmes were time and cost critical.

On this particular scheme, Hughes and Salvidge identified an alternative method of deconstruction. Instead of dismantling the pier section by section, we devised a method of lifting the entire roof sections by crane at night for processing on the apron level during the day.

The airport has stringent controls for working airside and we identified that to work at night was a quicker and more cost effective option. The result was a programme saving of 2 weeks on a 20-week programme.

As we were able to process the arising material in house and in a more structured method on the apron, this maximised the value of metal arisings by waste streaming the ferrous and non-ferrous materials for further recycling.

As always, safety was of paramount importance, BAA Capital Projects Safety Advisor and Balfour Beatty’s Project Director both recognised our contribution to the Balfour Beatty Zero Harm Campaign. BAA Safety Advisor commented “The demolition of the pier roof by Hughes and Salvidge was a very professional, well-planned operation”.