The low-level development at the western end had a footprint of approximately 4,000m². There were also a number of canopies and lean-to buildings that were not included in these measurements. There was still extensive plant, machinery and equipment within the buildings which often extend between floor levels. There were also a number of lift shafts throughout the building.

The scope of works for this 10-month project included:

The works were located within a live Port with various businesses and members of the public within close proximity. Control measures and safety precautions were installed throughout the entirety of the project to ensure that our works had no negative impact on the safety or daily running of the Port and neighbouring businesses.

During our tender period investigations, we noted the potential for the presence of UXO. The potential presence was noted within our risk assessments and control measures were implemented to ensure any works were properly managed.

Hughes and Salvidge began this project in the midst of the COVID-19 pandemic, and ensured that strict procedures were put in place to protect our teams, the client, other trades and stakeholders, and the general public and local businesses. They included:

The structure contained localised areas of leftover/residues of former products. During the site establishment phase a team of operatives completed an environmental sweep of the structure to remove loose product that remained. Operatives carried out a COSHH sweep, cleaned areas of flour/grain, contained and remove it prior to other works commencing.

All COSHH was stored within a dedicated COSHH store ready for removal from site by a licensed removal contractor.

As a precaution we engaged with an ecologist to carry out an investigation report for the presence of any nesting birds. This took place during the lead-in period of the project to ensure any required mitigations could be implemented early to avoid delays to the project.

The report identified nesting birds and Hughes and Salvidge adjusted our programme and sequencing in order to leave the structures with the nesting birds standing. Once the birds had vacated, and our ecologist was happy, we then commenced the works to those structures.

The site was split into five phases, with smaller phases built into each phase – 1A, 1B, etc.

Works began on the environmental sweep, pest control measures and the commencement of asbestos removal and soft strip operations in buildings within Phase 1.

With the asbestos removal and soft strip works completed, structural demolition commenced. The works were carried out in a sequence to allow the safe demolition to be carried out around the needs of other businesses within the Docks. There were various structures to be demolished of different construction and sizes.

Whilst the mechanical demolition was carried out to Phase 1, operatives completed the Phase 2 & 3 Environmental sweep, soft strip and asbestos removal works. 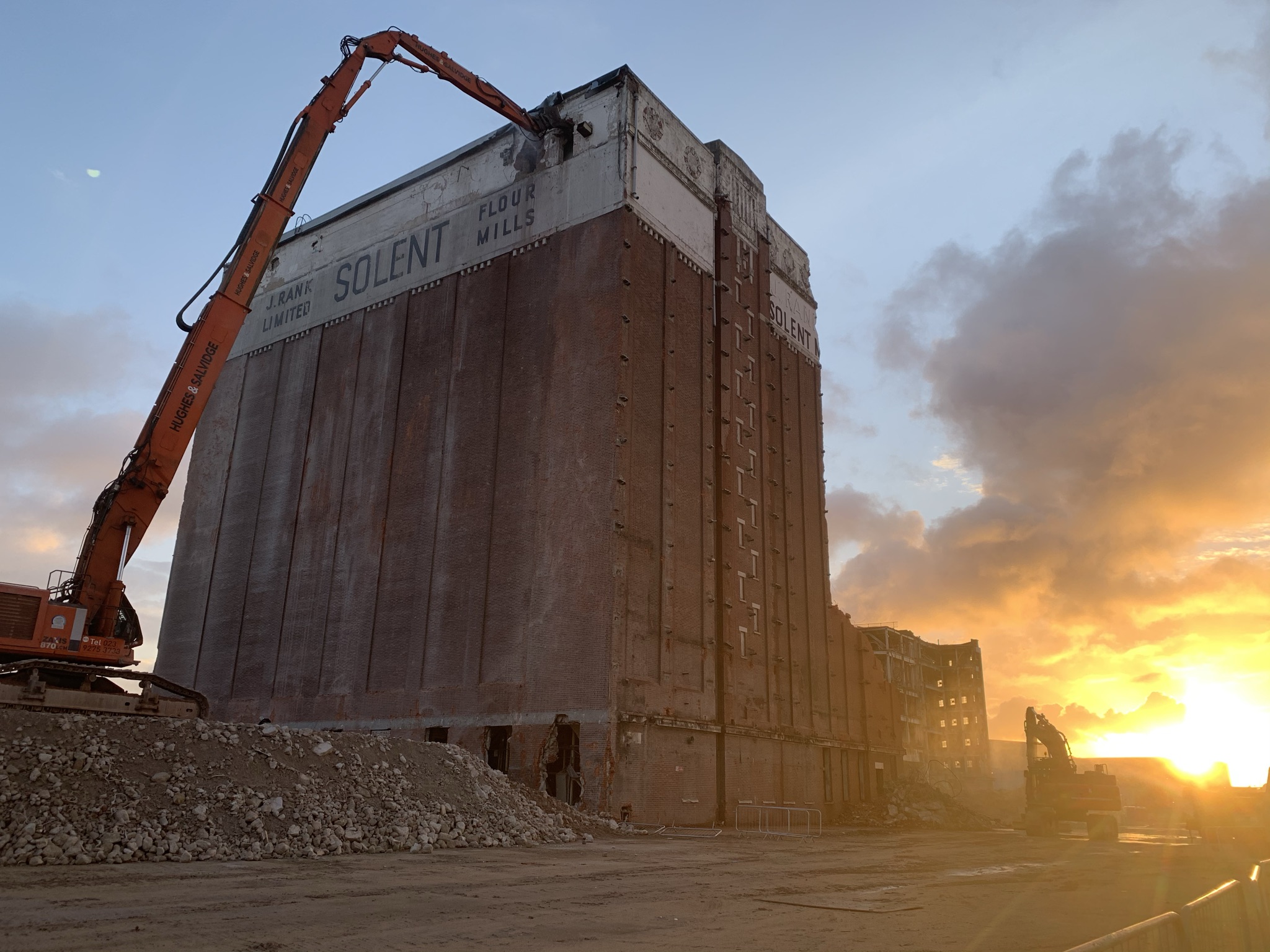 Works continued on 1B as Building 2B, 2C, 3B and 3C commenced. Building 2B was the former Provender Mill. It was six storeys in height and comprised load-bearing masonry walls with a central spine of cast iron columns. The middle of the building housed a reinforced concrete section and was provided with lateral stability by the gable end and intermediate walls. Building 2C was the Cubing Mill and constructed of steel portal frame encased in concrete with a mixture of timber and concrete reinforced floors.

During September 2020, works progressed through the remaining sections of Phase 2 and works commenced on 3B and 3C. 3B and 3C were reinforced concrete silos over cast iron columns. The structure had two concrete cores which were situated north and south of the section to be demolished, these maintained the structural stability and allowed for partial demolition.

In October 2020, demolition of 3B and 3C were completed and Phase 4 commenced. Phase 4 was constructed of concrete encased steel portal frame with masonry cavity external walls.

Once Phase 4 demolition was completed, Phase 5 – A, B, C and D – commenced. Section A was made up of 4 silos. A section of 5B north of the silos was removed leaving the bay adjacent to the silos in place to provide stability. Section 5B was removed up to where the building splayed out, creating enough room to fell the silos over.

Section 5B was constructed of steel frame, and concrete encased at low level with concrete floors, this phase was completed in December 2020. The final stage of demolition works consisted of the demolition of 5D. Due to the close proximity of the road, on Phases 5C and 5D, a rubber crane mat was held in position to prevent debris from entering the road and a partial road closure during the last section of demolition. The mat was held in position whilst the perimeter brickwork was pushed into the building’s footprint. The structure was then reduced in height.

Once a significant amount of ground bearing slab had been exposed, we began removal works. All excavations were backfilled progressively. Site-won hard inert arisings were crushed off site at our crushing yard in Southampton Docks and returned to site where required to be used as fill material for any pits/voids.

This Hampshire demolition project involved extensive asbestos removal and a package of...

The site, located in Southampton, near the docks, was bound on three...

Demolition of the VTS Building and Shed 38, Southampton

The machinery used enabled the job to be completed as safely, quietly...

All works were carried out to an extremely high standard in order...