All buildings were soft stripped and asbestos removal works were undertaken prior to commencing demolition works.

The project was in close proximity to public areas and therefore had an impact on the local environment.  We included for all measures necessary to ensure that all operations carried out were compliant with the local authority requirements and Environment Agency pollution prevention guidelines.

Although the asbestos removal contract was undertaken by a separate subcontractor, 100% removal of hazardous materials could not be confirmed. Hughes and Salvidge team members, who are all fully Asbestos Awareness trained, ensured they were on the lookout for previously undiscovered asbestos throughout the demolition processes. When found, our operatives followed our strict Asbestos Procedures. 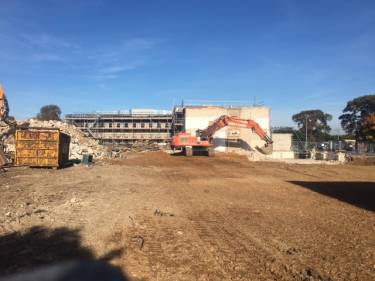