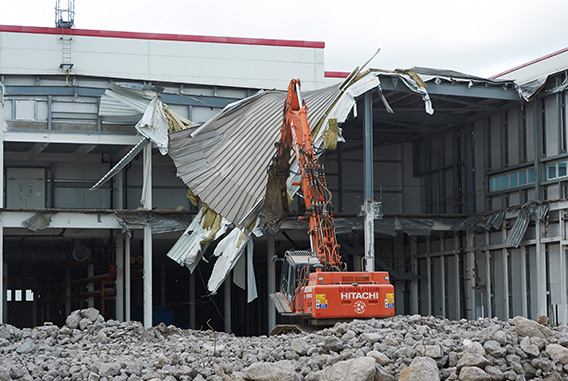 Tearing down the roof in Newport[/caption]

The demolition site in Wales was situated in an industrial complex which was constructed in the mid 1990’s as a base for the LG Electronics Group.

The site had been split into discrete zones of development, which included the redundant main Central Utilities Building, a large steel structure, a water treatment area with a live water main and a water storage area. The industrial park itself was still operational during the demolition works and adjacent users were served by live services passing through the contract site.

Although the site only had a light flow of traffic on a daily basis, the impact of our operations had to be taken into consideration. Maintaining the operation of the raw water main to an adjacent data centre was a critical requirement and Hughes and Salvidge erected a scaffolding support platform under a section of overground live main to give it added stability. We also had to ensure that dust and other debris were suppressed to protect the surrounding environment.

Hughes and Salvidge achieved a high rate of recycling of plant and materials on site, over 95%, with minimal waste being sent to landfill.

We completed this project to the complete satisfaction of our client.