Hughes and Salvidge won a competitive tender to carry out the demolition of various buildings at The Hard in Portsmouth.

The two and three-storey structures were on a plot of land off Queen Street, adjacent to the Historic Dockyard, and we were contracted to complete the demolition and site clearance ahead of the development of a new hotel.

The derelict structures contained a high level of site waste and this was cleared after licenced asbestos had been removed from the waste and structures. Once fully stripped out the demolition began.

Careful and precise methods were employed to minimise disruption to surrounding businesses, the general public, the public highway and the neighbouring Historic Dockyard during our works.

One of the buildings demolished was the former food wholesalers Norreys and Sons, who during the Second World War supplied many of the Royal Navy Fleet with supplies.

During the strip out of the building a log book containing sales to the Royal Navy, local business, local hospitals and individuals from Portsmouth between 1934 and 1941 was discovered.

Our site team rescued the historic document and it has since been offered as a donation to The National Museum of the Royal Navy. Read the full article about the rescued document on our News section.

Once the buildings were safely demolished, our crushing team came in to crush all inert arisings from the demolition process and the site was then cleared and levelled, ready for handover to the client within the 6-week programme and to their complete satisfaction. 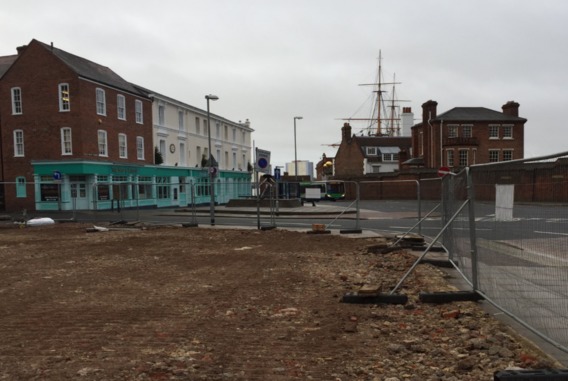