Aspire Defence (on behalf of the MOD)

We carried out asbestos removal and demolition of the former Military Power Station in Aldershot over a 2-year period. [caption id="attachment_746" align="alignnone" width="568"] 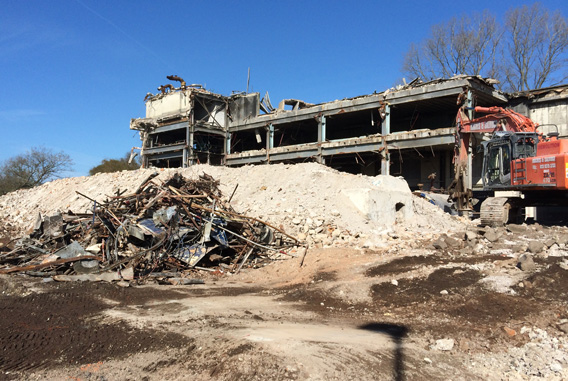 Part-demolished[/caption] The former power station was located near to occupied structures, adjacent to a canal and a new electrical sub-station which had to be protected throughout the duration of the project.

A comprehensive asbestos removal package was undertaken by Hughes and Salvidge prior to the main works being carried out. Detailed risk assessments and method statements were agreed following consultation with the Health and Safety Executive (HSE) prior to any removal works being carried out and all hazardous waste, for example asbestos containing materials, was disposed of in line with the requirements under the Hazardous Waste Regulations at a licensed facility.

We undertook the dismantling of turbine halls, the removal of internal plant and switchgear and all pipework and internal plant/tanks were decontaminated prior to disposal or recycling. To facilitate these works, Hughes and Salvidge re-powered and certified the existing overhead cranes.

All internal plant and mezzanine floors were removed and the main structure demolished. The building was constructed of reinforced concrete roof beams, columns and side panels which were demolished in sections in a planned sequence. There were are also 6no. 25m concrete chimney stacks within the demolition scope.